The Guadiana estuary presents a revealing case study on the impacts of climate change on fragile biodiversity in the Mediterranean. The third-largest river basin (67.133 km²) in the Iberian Peninsula, the Guadiana originates in the Lagunas de Ruidera in central Spain and flows 742 km into the Gulf of Cádiz on the Portuguese coast. From the 13th century, the estuary acted as an imaginary “natural” borderline between Portugal and Spain. In 1926, upon the Convention of Limits — Convénio de Limites / Acuerdo de Límites—, an agreement on the official border demarcation was eventually reached. The word “limit” referred solely to the legally binding abrupt frontier in the middle of a river between two riparian states. Since then, other sorts of limits have also been recognized. 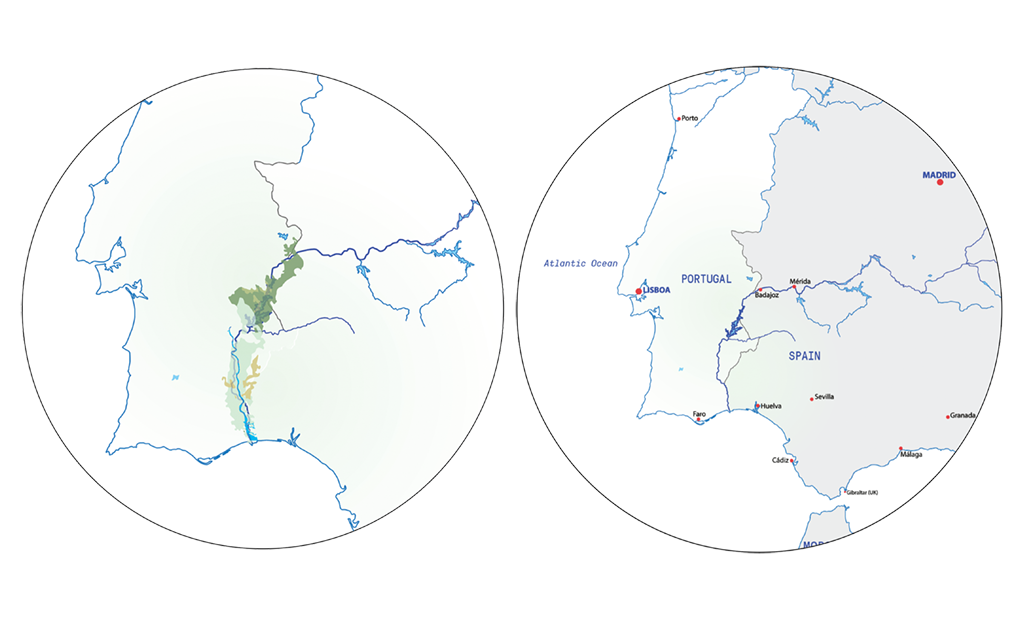 Despite being highly susceptible to flooding, aridity, water scarcity, drought and salinisation, Guadiana continues to be used for power generation, hyper-intensive agriculture, cattle grazing, and tourism. Water flow management issues between upstream Spain and downstream Portugal have been the cause of several social and political disputes as various regional, national and supranational regulatory intermediaries acted with poor communication and cooperation results. Although the river divides both countries socially, economically, and jurisdictionally for a significant part, the Guadiana estuary remains a self-contained entity with a fragile and unique ecosystem. Such interconnected biodiversity means that any slight interference can potentially disrupt the entire ecological chain, the socio-economic circulation, and the resilience surrounding Guadiana. Indeed, once we get more granular, we start to observe the hydro-ecological “limits” of the river, inevitably recalling the big-picture forecast of the “Limits to Growth” fifty years ago (Meadows et al, 1972). 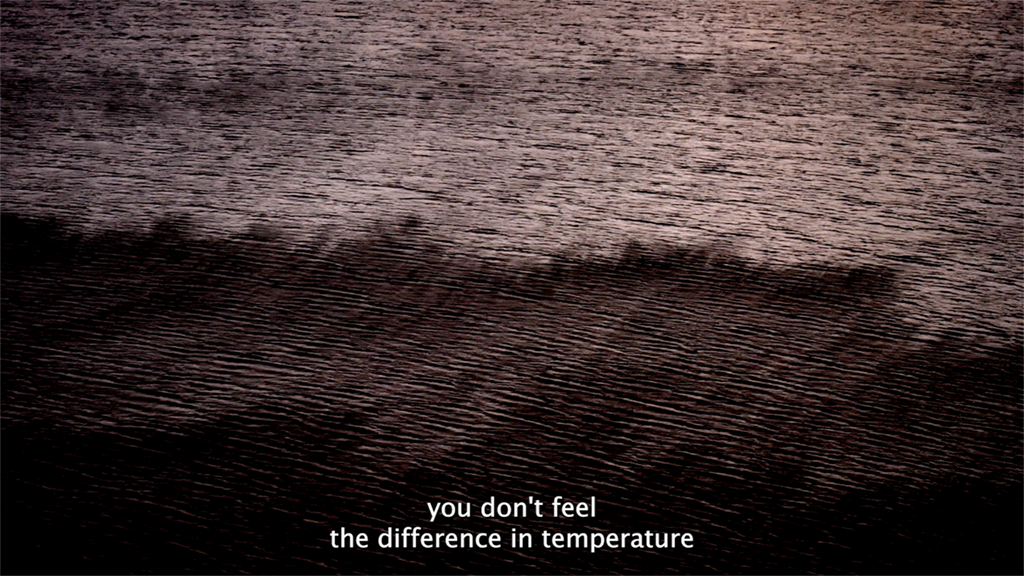 Although predictions need to be taken with a grain of salt, it is still possible to understand the behaviour of a system on a certain time scale (Bardi 2011). Computational modelling allows us to articulate different systems of the world in their complexity, nonlinearity and feedback-domination. In general, quantitative modelling is based on mathematical expressions that define how various elements of a system relate to one another; when a simulation captures one of many possible different outcomes, a “scenario” is produced. And it is the developed scenarios that rely on data and mathematical calculations of feedback-loops that are critical to determining future impacts on spatially variable and diverse ecosystems like Guadiana.

It is with this mind that Guadiana in Four Movements interrogates the present and future of the transboundary River Guadiana estuary via two complementary approaches. The first consisted in having a grasp on how local people perceive and make sense of the effects of climate change in their daily lives. This was guided by exploratory and sensory ethnographic fieldwork along the Guadiana estuary in an attempt to capture some of the intricate dynamics of objects, people, images, sounds and various technologies that, to different degrees, co-exist and interact in this specific place. In doing so, we explored how different types of sources and materials, singular and trivial, visible and invisible, are, and could be, assembled, connected and made meaningful. The assemblage of such diverse materials was thus marked by an exploration of how depicted elements connect rather than how they ‘are’, seeking to represent these as unfolding forces rather than static essences (Deleuze & Guattari 1978). 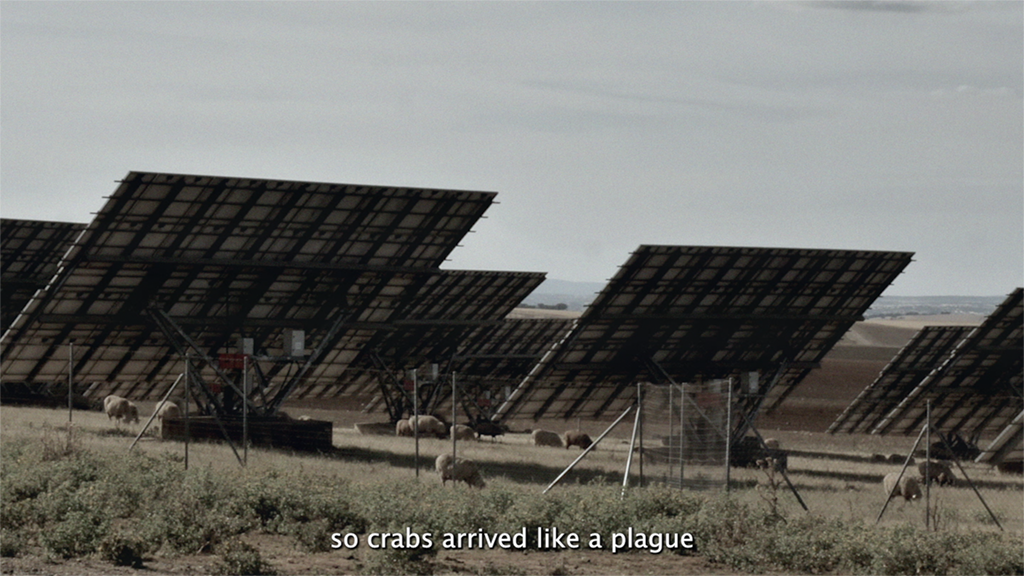 While the images and soundscapes collected during fieldwork guide and territorialise this piece, it is through data sonification that the predicament of Guadiana is universalised. Indeed, data sonification not only challenges representations of climate change scenarios, which often come in the form of visualised projection, but also can offer a “panoptic view from above, or from the future” in an almost “prophetic” fashion (Helmreich 2016). Hence, a second approach consisted in looking at existing climate models, involving the thorough selection, analysis, and systematisation of raw data informing of possible future scenarios, in a process leading to an auditory mapping method as a result of the sonification of data. 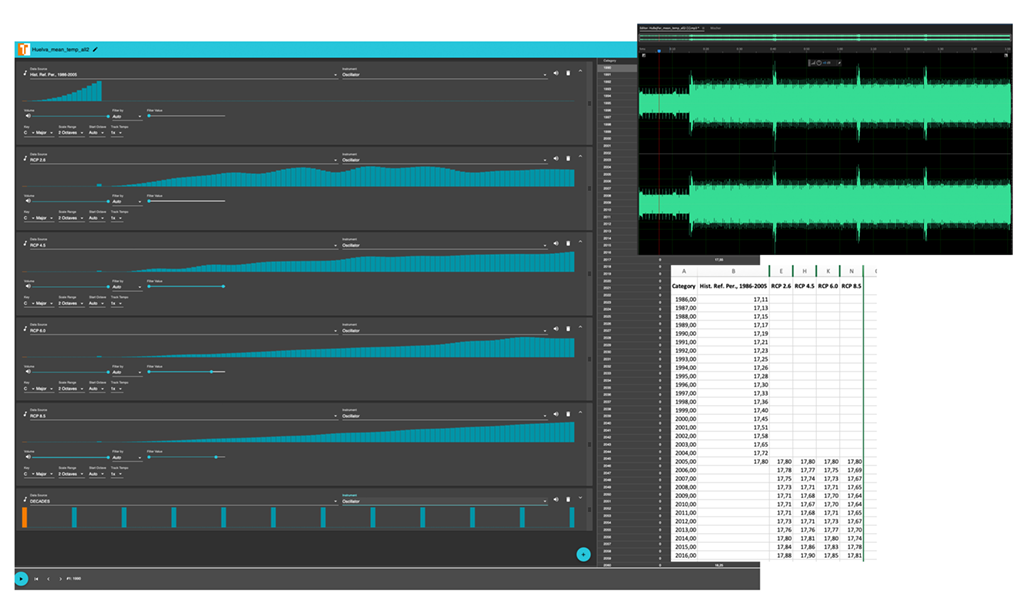 Guadiana in Four Movements unfolds along four parts based on the different IPCC scenarios conveyed as data sonification in order to enable a better understanding, or an appreciation, of changes and structures in the data that underlie the display. The interval baseline consists of the measured mean, maximum and minimum temperatures from 1981 to 2014 in the watershed of Lower and Middle Guadiana Estuary, partially from the local regions of Huelva (Spain), Lower and Central Alentejo, and Faro (Portugal) on the basis of initial benchmark, also commonly known as the best scenario of a change in temperature of ≈1.8ºC. The same regional data was conveyed into sonification for the depiction of further projections (≈2,7ºC/≈3,6ºC/≈4,4ºC) spanning to ca. 120 years. The composition of the four tracks was built entirely by the annual aggregate temperatures via duration and pitch. Each year correlates to a 1-second segment while decades are marked by an identical signal. Consecutively, the pendulum between quasi-palatable musicality and abrasive dissonance acts to evoke visceral emotions and an immediate grasp of the discrepancies of the scenarios.

Guadiana in Four Movements then emphasizes and moreover transduces (in the sense of sound being a form of energy always transmitted through a medium) the limits to growth of Guadiana river basin by using data sonification as a complementary and consecutive component. As a result, data sonification challenges the viewer pointing to how “what one hears is related to what one believes should be heard, as well as what one thinks about the nature of sounds (…) (Helmreich, 2016)”.

Guadiana in Four Movements longlisted on Information is Beautiful Awards 2022

Inspiration Forum LAB 2021/22 The Limits to Growth at Display, Prague

(1984) is a Lisbon-based anthropologist and filmmaker. Currently, he is a research fellow at the Social Science Institute, University of Lisbon (ICS-ULisboa).

(1984) is Münster and Seville-based independent information designer. He takes over data-driven visualisations for politics, academia and civil society.

We use cookies on our website to give you the most relevant experience by remembering your preferences and repeat visits. By clicking “Accept”, you consent to the use of ALL the cookies. However you may visit Cookie Settings to provide a controlled consent.
Cookie settingsACCEPT
Manage consent

This website uses cookies to improve your experience while you navigate through the website. Out of these cookies, the cookies that are categorized as necessary are stored on your browser as they are essential for the working of basic functionalities of the website. We also use third-party cookies that help us analyze and understand how you use this website. These cookies will be stored in your browser only with your consent. You also have the option to opt-out of these cookies. But opting out of some of these cookies may have an effect on your browsing experience.
Necessary Always Enabled
Necessary cookies are absolutely essential for the website to function properly. These cookies ensure basic functionalities and security features of the website, anonymously.
Functional
Functional cookies help to perform certain functionalities like sharing the content of the website on social media platforms, collect feedbacks, and other third-party features.
Performance
Performance cookies are used to understand and analyze the key performance indexes of the website which helps in delivering a better user experience for the visitors.
Analytics
Analytical cookies are used to understand how visitors interact with the website. These cookies help provide information on metrics the number of visitors, bounce rate, traffic source, etc.
Advertisement
Advertisement cookies are used to provide visitors with relevant ads and marketing campaigns. These cookies track visitors across websites and collect information to provide customized ads.
Others
Other uncategorized cookies are those that are being analyzed and have not been classified into a category as yet.
Save & Accept
Powered by